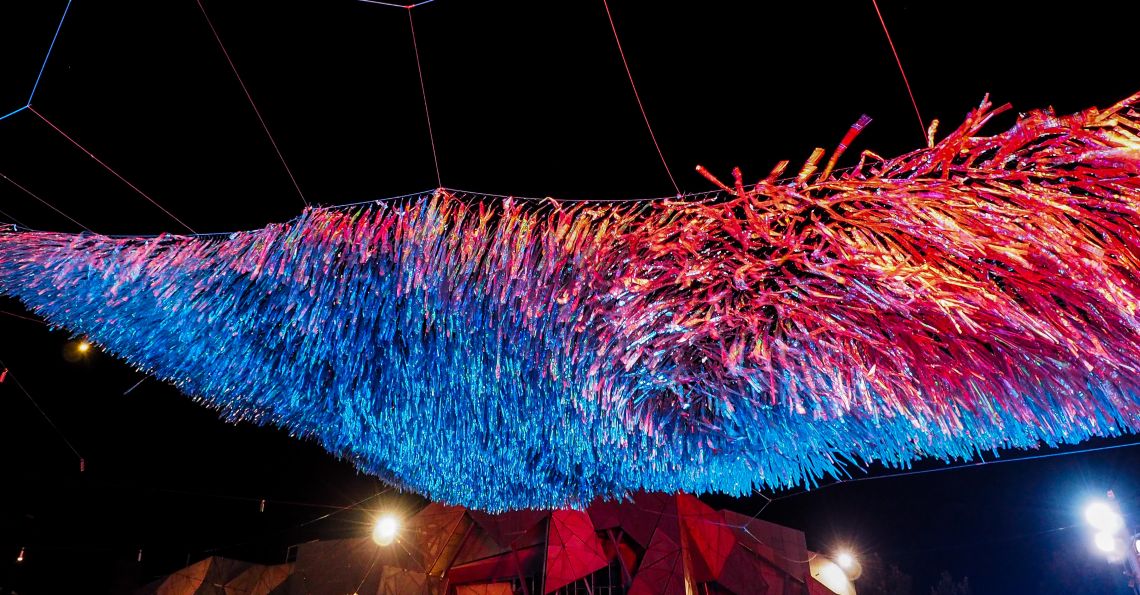 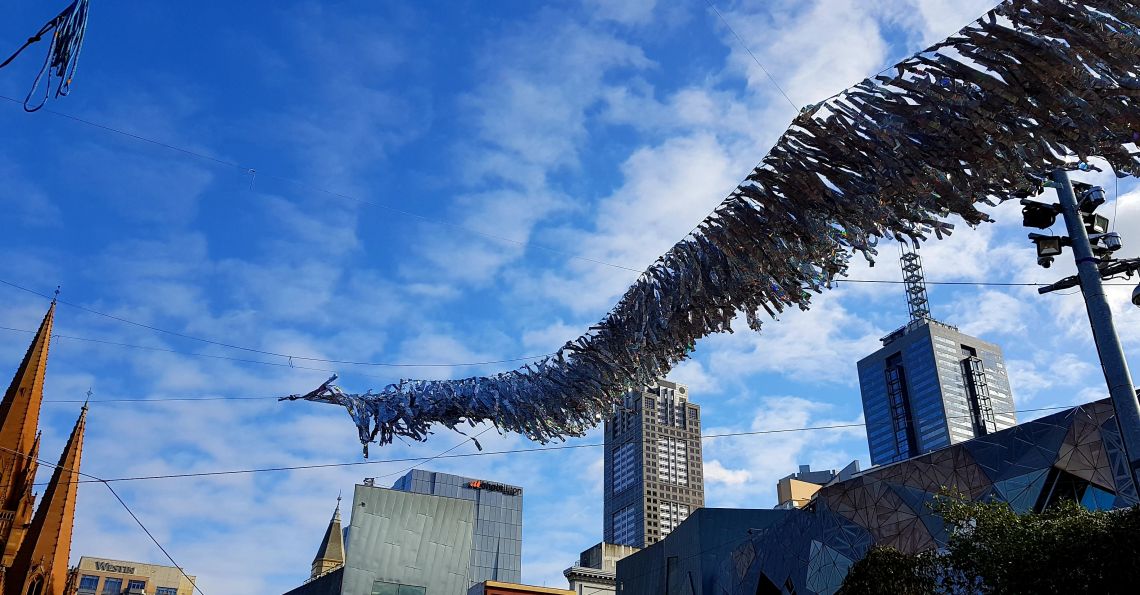 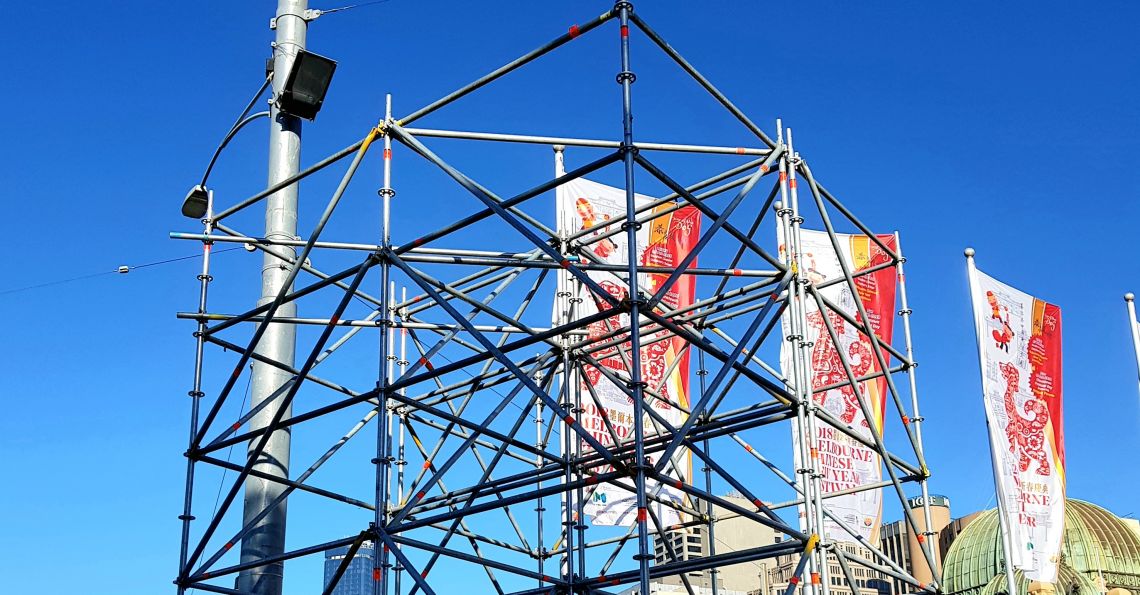 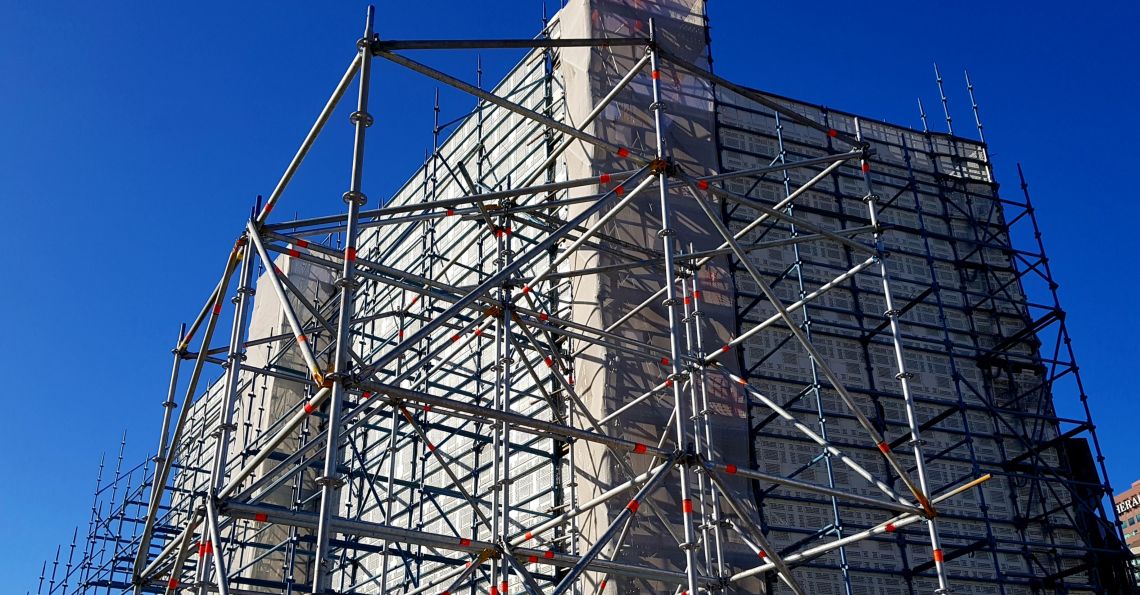 White Night is an annual event run over multiple precincts and stages across Melbourne. Liquid Sky, an art installation suspended over Federation Square by world-renowned artist Patrick Shearn (Poetic Kinetics) was to be the centrepiece of White Night 2018.

Phelan Shilo Partners were engaged to design the freestanding purpose-built towers that served as satellite anchorage points for the ‘Skynet’, a key component of the installation.

This project posed multiple challenges including working across different time zones with US-based consultants NOUS, designers of the ‘Skynet’.

To support the suspended artwork, significant tension loads had to be anchored all across Federation Square at high elevations. The specifications for the ‘Skynet’ nominated anchorage loads of up to 10.4 tonnes in the horizontal direction and 4.4 tonnes in uplift. Such large forces at heights of up to 7m, coupled with the low load rating for the site (5kPa), posed immediate feasibility issues for the project.

Furthermore, the artwork was to be pieced together on site by the specialists at Poetic Kinetics by joining many individual lines. The exact layout of the catenary system was somewhat fluid, which meant that there was a high probability that the directionality of the loads could vary between design and the as-built ‘Skynet’.

The support structures were proposed to be constructed using scaffold with predetermined modules giving limited flexibility to accommodate the uneven topography of the site. Furthermore, the slope of the site made earthing the horizontal forces difficult through the scaffolding.

We immediately recognised the feasibility issues associated with the required anchorage loads and the loading constraints at Federation Square. To reduce the forces on our support structures, we liaised with NOUS to find ways to limit the tension in the catenary lines of the ‘Skynet’ and give the system more ‘slack’. The design was reiterated until the anchorage loads converged with the capacity we could achieve from our support structures.

We provided custom tower designs for each support structure to minimise the space the towers occupied and ensure the scaffold did not clash with the highly dynamic catenary lines. Additionally, we analysed multiple loading conditions for the towers, allowing for variability and inconsistency of the load directions due to the variability inherent in on-site fabrication of the ‘Skynet’.

We provided custom rigging methods to spread the anchorage forces evenly into the scaffold system, ensuring that no single component of the scaffold was overstressed. We utilised clamp-on rosettes and additional bracing to restrain the scaffold 'jacks' to enable the structure to earth the high lateral loads safely and evenly.

The towers were designed to spread the load evenly on the surface at Federation Square. By reducing the amount of ballast in the towers and providing continuous spreaders underneath the scaffold structure, we were able to keep the load within the 5kPa load limit, despite the significant requirements placed upon the structures.

We are proud to have helped deliver such a unique and memorable project for the city of Melbourne.